By 9jabook in playing on September 28, 2020
Spread the love
thanks for the views we appreciate : 65 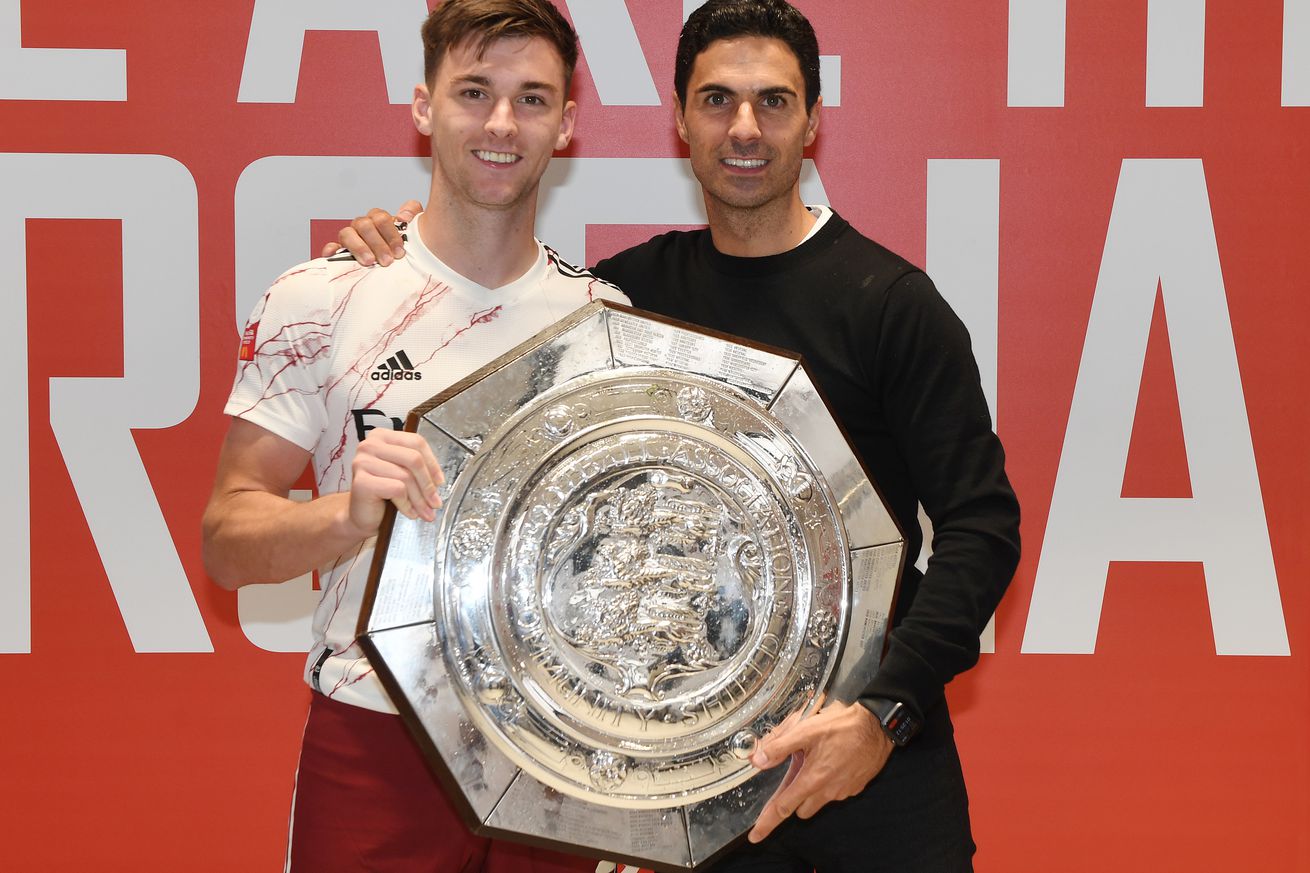 Aaron from The Short Fuse stops by for a lovely chat

The Liverpool Offisde: Arsenal have had an interesting window, with more on the horizon it seems. What I’m interested in what’s going with defense. Who do you think starts in Arsenal’s first choice XI backline? Is it a back 4 or back 3/5?

The Short Fuse:When it comes to Arsenal’s preferred defense, your guess might be as good as mine — both for personnel and formation. Injuries across the backline

Hector Bellerin is first-choice on the right, Kieran Tierney on the left. That is if Tierney is healthy — he’s been dealing with some groin tightness which forced a late switch before the West Ham match last weekend. Whether the pair play as outside backs in a four or wingbacks in the 3/5 is a tougher question. I don’t think Mikel Arteta has a preferred formation; he switches based on opponents. Against the better attacking sides, he’s generally gone with the 3/5. He’s gone with four at the back when he feels he can get away with squeezing the extra attacker on the pitch. Whether it’s 2 or 3 CBs, one thing we do know is Arteta is dead set on having a left-footed player on the left and a right footed player on the right.

Of the right footers, David Luiz tops the depth chart with Rob Holding in second. Before tearing his hamstring off the bone, Shkodran Mustafi was probably ahead of both of those guys, but he’s not expected back in training until mid-October. Youngster William Saliba, who Arsenal bought last summer but immediately loaned back to St. Etienne, is the right-footer of the future. Pablo Mari, who tore ligaments in his ankle 20 minutes into the restart in June, was originally going to be the left-footer. Now, it’s Gabriel Magalhaes. Sidenote: Arsenal look to have a real one in Gabriel — he’s big, physical, passes well, and scored from a set piece against Fulham. I’m looking forward to seeing how he handles the Liverpool attack.

I expect the 3/5 on Monday — Tierney, Gabriel, Luiz, Holding, Bellerin from left to right.

TLO: You have just won the FA Cup, but is keeping Aubameyang Mikel Arteta biggest win?

TSF: I get that the turn-of-phrase here makes for a good literary device, but the question is tougher to answer than you think. And I’m not sure the two things — winning the FA Cup and Pierre-Emerick Aubameyang staying — can be separated. If Arsenal don’t qualify for the Europa League, convincing Aubameyang to stay is much more difficult. He wants to play in Europe, and a player of his caliber absolutely should be playing in Europe. But it’s more than that — follow me down the rabbit hole.

Qualifying for the Europa League brought more money into the club, albeit less than the Champions League does, but any money is good money, especially in today’s cash-strapped football landscape. Aubameyang’s new contract isn’t cheap — £250,000 per week for three years (£39,000,000 total) with incentives. I’m guessing that qualifying for the Champions League is the biggest one. Taken together, if all the incentives are hit, Aubameyang’s contract reportedly becomes worth more than the £350,000K weekly wage of current Arsenal top-earner Mesut Özil.

Without that Europa League cash, would Arsenal have been able to pay Aubameyang and buy Gabriel AND make what looks to be another splashy move (either Houssem Aouar or Thomas Partey)? Probably not. To be fair, the Europa money alone isn’t enough to cover all that either, but it’s much easier to convince the bosses to loosen the purse strings when you’ve won a trophy and qualified for Europe. Arsenal needed to make those moves to show Aubameyang the club was committed to Mikel Arteta’s plan.

So the FA Cup win was the key to it all.

And lifting that trophy (well, dropping then lifting) was a nice theory-into-practice demonstration of where Mikel Arteta can take the club with Aubameyang wearing the armband. Aubameyang recently said that Arteta was the lynchpin; he wasn’t going to stay with Unai Emery at the helm. Arsenal weren’t winning the FA Cup with Unai Emery at the helm, either. If it all seems a bit circular, it’s because it is. But there is one constant at the center — Mikel Arteta. Now that might be the Arsenal-fan-reared-on-Arsene-Wenger in me looking for another manager to hero-worship, but neither the trophy nor the contract happen without Arteta’s influence.

TLO: Mattéo Guendouzi and Lucas Torreira seemed like they could be the arsenal midfield for 10 years. But both appear on their way out. What happened?

TSF: Yeah, it’s funny how quickly things change. Lucas Torreira had a great first season in North London with Unai Emery at the helm. I was excited for him to develop as a player and was looking forward to cheering for him for years. The high work rate, the tenacious tackling, the physicality all wrapped up in his 5’6, 130 pound body — fan favorite written all over it. But then he just didn’t develop. Critically, he’s not great on the ball. He didn’t work as a box-to-box for Emery, and he doesn’t work in Mikel Arteta’s double pivot. He excels as more of an out-and-out defensive midfielder, and that’s not really a position in the en vogue tactical setups. It’s kind of the same predicament Arsenal found themselves in with Mesut Özil — a skilled player that just doesn’t fit.

Mattéo Guendouzi’s Wile E. Coyote running off a cliff holding an anvil-esque fall was also a “fit” issue — his antics didn’t fit with Mikel Arteta’s no nonsense approach. Everybody points to the Neal Maupay incident where Guendouzi grabbed Maupay by the throat at the final whistle, but that was the not-so-small straw that broke the camel’s back (he hasn’t played since). Guendouzi had been on thin ice for a while. He supposedly was late to practice/meetings more than once. There were training ground rows with teammates. There was a public behavior incident with some yelling/dancing/shirt-removing at an inappropriate time during the team’s winter training trip to Dubai. He was warned that he needed to grow up and adjust his attitude. He didn’t. Then, when he met with Arteta and the higher-ups at the club post-Maupay incident to discuss his behavior and his future at the club, he reportedly was defensive and doubled-down on his actions instead of being professional and at least faking contrition. I think it’s a bit of an open question between how problematic his actions actually were (although we may not know the full story) and how much of this all is Mikel Arteta wanting to take a hard line and set an example, but at the end of the day, it’s the coach’s decision. If he says you’re misbehaving, it doesn’t really matter what you think, does it?

So where does that leave Arsenal with Torreira and Guendouzi? Torreira looks to be headed either to Atletico Madrid or Italy. Diego Simeone wants a no-strings-attached loan, and Arsenal want an obligation to buy. It’s funny to me that Atleti are steadfastly refusing to budge off making Arsenal pay Thomas Partey’s full £45M release clause upfront and in cash in light of trying to get a sweetheart deal on Torreira. It feels a little too “wanting to have their cake and eat it too” for me, but they’ve got the stronger negotiating position, I think. If he goes to Italy, it’s likely Torino, but Fiorentina are interested as well.

Guendouzi’s future is a tougher nut to crack. Arsenal tried to use him as make-weight in a deal for Houssem Aouar, but Lyon categorically refused. He’s been linked to PSG for a while, but Thomas Tuchel threw a whole mess of cold water on that a few weeks ago. The bigger clubs don’t want to deal with the headache, and the smaller clubs can’t afford the price that Arsenal are seeking, even with his warts very much out in the open for all to see. Arsenal may very well end up stuck with him this season. Mikel Arteta has consistently said that the proverbial door is never fully closed for anybody. Guendouzi has returned to training with the first team after spending most of the summer training alone on the side of practice. Maybe the bridges aren’t fully burned / there is a way to rebuild them, but that’s still a ways off, I think.